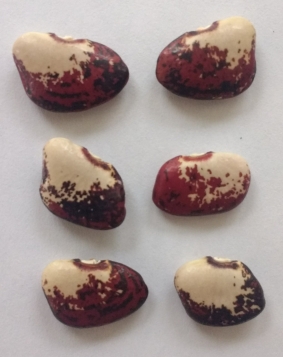 Potawatomi Lima beans hail from the Potawatomi Indians of Southern Michigan. After numerous years of selective preservation of these seeds, the Potawatomis had a lima bean that could grow in colder climates and shorter seasons. These are a pole variety and easily cover 8-foot teepees before looking elsewhere to climb. The seeds can be eaten as a shelling bean, or allowed to dry on the plant and used as a dry bean.

These limas did well in Vermont where we were able to collect both dried and green beans. In Georgia we are able to get two dried bean crops off one plant per season. Sometimes the pods will shatter while still on the plant. The seeds that land early in the summer will often end up producing by the fall and we will have a new harvest of shelling beans.

Climbing vines up to 8 feet
Many three seeded pods
15 grams ~25 seeds, $2.50 plus shipping and handling, just drop us a line.

Read up on how we came to select this variety.