North Georgia Candy Roaster were originally grown by the native Cherokee tribes residing in present day North Carolina, eastern Tennessee and northern Georgia, and were an important food source to these tribes, making them an excellent variety for the deep south. 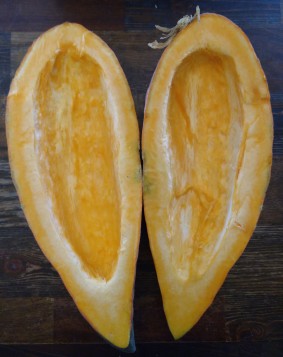 They are heavy squash with a weight range of 10-250 pounds (according to Slow Foods USA) though most fruit from the vines we grew ranged between 8-15 pounds. A pale orange color with greenish blue tips and some green striations and patches, they come in both tear drop and banana shapes. We found that most of the squash produced later in the season tended to be more banana shaped, and have more green coloration than fruit produced earlier in the season.

These store well and taste excellent cooked in any manner imaginable. They also make a great substitute for pumpkin pie around the holidays.

Ideal for three sisters planting, their large leaves help keep moisture in the ground and the weeds at bay, these massive vines can reach lengths of at least 25 feet. (There’s no telling how long they could get if you coax them along.) Twelve plants produced well over 200 pounds of squash throughout the summer with minimal watering once vines were established. 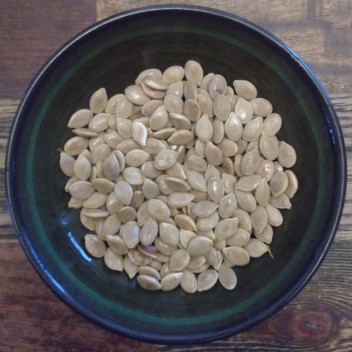 Excellent cooked in a variety of ways, these squash store well in a cool dark room, and make a wonderful substitute for pumpkin in pies during the holiday season.

North Georgia Candy Roaster is of some concern as it is an open pollinated plant with separate male and female flowers that require a third party for pollination. Because of this necessity, it is important to make sure there are no other Cucubrita maxima varieties within a mile, or hand pollination must be performed to ensure seed purity.

You can read more about how we came to pick this variety, or watch as I use the North Georgia Candy Roaster as a subject demonstrating hand pollination of the Cucurbitacae family.

To purchase North Georgia Candy Roaster seeds from us, use this page.

Growing up in New England, winter squash were a staple in the garden – they were sweet by nature, but the cold falls brought the sugars out to perfection; their thick rind allowed them to sit in the root cellar all winter waiting to be used, sweetening as the days passed; their flowers are showy and easy to hand pollinate, and there is an endless variety to choose from ranging in flavor, shape, color, texture, size and plant habitat. I would often find myself perusing farmers’ markets looking for odd shaped and unique varieties to save seed from in the hope that something might come back true to form the following years.

When we moved to Georgia, the farmers’ markets were all but devoid of winter squash. The local nurseries could not suggest any specific varieties that would weather the heat, the squash borers, and, in the end, produce something remotely palatable. Initially, I went with a couple of my favorites: Delicata and Sweet Dumpling. Unfortunately, they did not work so well. By the time the weather started to cool, the fruit had been harvested and the vines long dead. Squash vine borers feasted, and the little squash we actually harvested was anything but sweet.

Not willing to miss out on one of my favorite garden delicacies, I went to the internet to search for some answers. I always learned that squash was a staple of Native Americans, and the Cherokee inhabited this land until they were driven to Oklahoma, so I started there and somehow ended up at Baker Creek Heirloom Seeds in search of something called the North Georgia Candy Roaster.

Unlike my favorites – which are all varieties of Cucubrita pepo – the Candy Roaster is a Cucubrita maxima, which means it’s big: the vines are big, the leaves are big, and the squash is big, but it’s over sized leaves, lengthy vines, and ability to root at will from nodes along the vine make it an ideal candidate for three sisters planting, keeping weeds down and moisture in, a plus when it comes to gardening in the deep south. According to Slow Foods USA, the Candy Roaster was cultivated among the Cherokee tribes in what is today western North Carolina, north Georgia, and east Tennessee. We are in Middle Georgia, so our winters are incredibly mild, and our summers are hot, but based on the plants historical habitat, we had to give it a shot, and by mid-summer, we were not disappointed.

These squash did excellent in the garden, almost too well. By summer’s end we were inundated with squash. Throughout the summer we continually moved vines to grow back into the corn, but eventually just began trimming the ends of the vines that became too long and unruly. By the end of summer we had a couple of wheel barrows full of the orange squash either tear drop or banana shaped, all with a green tip and some with greenish blue striations. They were a marvel to look at, they tasted just as good, and to top if off, they produced all summer, though the second crop was much skinnier and smaller, they were just as tasty.

This squash was certainly a winner and one we will continue to plant for seasons to come. SlowFoodsUSA lists seed availability as concern, but fortunately, we have some seeds of this variety available. You can find these seeds here.

Using the North Georgia Candy Roaster as a subject, I made a how-to video demonstrating hand pollination of the Cucurbitacae family. You can watch it here.